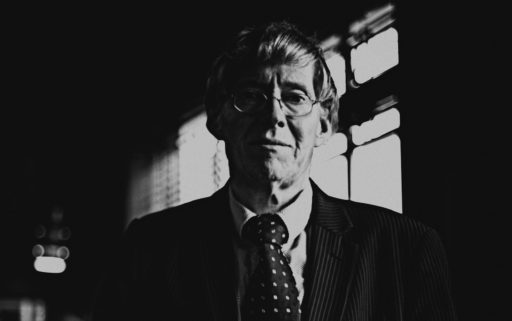 There is a word play in the title of Magnea B. Valdimarsdóttir’s short portrait documentary Helgi on a Stick that could be traced to its Icelandic original. The root word “priki” that means “stick” is quite similar to the name of the café (Prikith) the title character Helgi frequents and the film is centred around.

As the viewer is informed via title cards shown just after the film opening with the black and white photographs of the aforementioned bar and the introduction of Helgi at his “post” at the bar, Prikith is the oldest active café in Reykjavik, established in 1951. Today it serves as a café by day and a club and concert venue by night. Helgi is one of its most special regulars: he has been coming daily, every morning and every evening, for about fifty years. Over the course of the film, Helgi takes us on a tour of his personal history (the house he lived in when he first moved from Denmark, the church he went to, his former workplace in telephone factory), the history of the bar (its upgrades and conversions) and even the city history.

Stark black and white cinematography, taking over from the photographs in the introduction, handled by Magnea B Valdimarsdóttir and Logi Hilmarsson, suits the film well in more ways than one. Firstly, it gives it the necessary patina of time and emphasises on the Helgi’s old age and warm and friendly nature. Secondly, it creates the specific mood and even writes a new, previously unseen page of local history. In Icelandic context and specifically the context of Reykjavik, 1951 seems like ancient history, an upgrade of a bar like a historical event and the conversion of a nearby public toilettes into a gallery and a punk museum (shown in film, along with its owner and custodian Álfur) like a proper legend.

The trouble is, however, that the film works only for the local audiences, or at least those who have some previous knowledge about the city and the particular places. Magnea B. Valdimarsdóttir’s focus shifts back and forth from the protagonist to the place, leaving the lasting impression that it is actually in between them. There is no doubt that Helgi is not just the good spirit of the café, but also of the city itself, and that Prikith is one of the Reykjavik’s sights, but the lasting impression is that both of them together would function better in a mid-length or even a feature-length documentary that would provide more of the context.