Emperor Maximilian I and the Age of Dürer, through the eyes of a heraldist 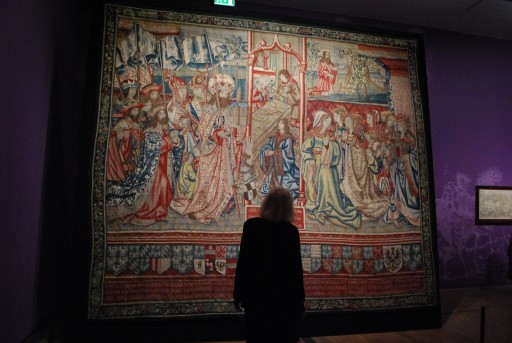 Maximilian I is a cult name among heraldists. He was a successor to the Atlantis of heraldic lore of Europe and, instead of being lost in the jungle, he navigated through it with unmitigated pleasure, with absolute command of the sense and the function of heraldry, and with immediate result that his understanding of heraldry became so firmly entrenched as to survive to all revolutionary, be it artistic or political, aberrations, frustrations or enthusiasm! This, in itself, is no mean feat! The actual exhibition at „Albertina“ is a treat for the senses of anybody that enjoys the same kind of fascination for the symbolic and systematic art that pretends, and succeeds, in transferring multitude of meanings and information by means of coded emblems and colours.

Let us, first, consider who the most prominent heraldic artists of his time were. Names of Duerer, Burgkmair, Altdorfer, Schongauer, Cranach or Holbein alone are sufficient to produce goosebumps on your skin! Perhaps in no other time in history a ruler was served by a concentration of such talent and energy within otherwise limited and subservient field of applied arts, and yet was able to bring them to an unisone heraldic credo. In fact, the long crescendo was getting on since Emperor Sigismund, but the grand finale undoubtedly belongs to Maximilan. Let us give him the due credit! If anybody doubts, just go to Albertina and look around. Heraldry is, in fact, integral part of a peagantry. What Albertina prepared and displays presently is Maximilan as supreme histrionic and pageantry master. One can not but recall the recent exhibition(s) dedicated to the work of Hans Makart and the triumphal procession he designed on the occasion of the regnal jubilee of Franz Joseph I. In a way, Hans Makart tried his hand in imitating his precursors in the position of the official artists of the Imperial Court. His thematic personage was Charles the Fifth, but his persona dramatis was much more Charles’s grandfather. In Makart’s case, the Imperial progress was an exercise in historical reconstruction, savant’s pedantry and theatrical carnival imagination; in case the Albertina presents to vistitors The Emperor transcends human component and appears as a supreme iconic image, a grand public show in motion, an apotheosis of the eternal concept of the divine right, an embodied splendor that fills the gap between triviality of the Earth and sublimity of the Firmament, a permission graciously bestowed upon the ordinary to have a preview of celestial glory and to practice playing own insignificant role in the Grand Design of the Universe. The celestial glory ascribed to Maximilian does not pertain to the sacral in the Christian sense of the word, it is ancient, to a certain extent pagan and mythological!

I have to point to something that will be quite understandable to any visitor of the present exhibition, heraldic expert or just a curious laic: the Altdorfer series (call it a roll, a serial, a succession of drawings, call it whatever your heart desires)! It is a triumph of art and craft in itself, it is a sheer exuberance and festivity for eyes. One should try to observe it just as a spectacle of forms, colours, rhythms and suspended motion! This is a musical and scenic gradual that progresses logically and formally from a prologue, gets momentum and symbolic crescendo and ends in an apotheosis, represented by the huge scenic coach that more than anything else reminds one of Pseudo-Dionysius Areopagites and his celestial hierarchy. Of course, some of the displayed drawings are well known, having been reproduced here and there. What makes this exhibition so unique is the fact that one can see them as an entity, as a row, an ongoing sequence, and this can not be experienced anywhere, only here, in Albertina, and only now! Somehow, it does not matter that what one sees here is, in fact, only the half of the entire set of illuminated parchments. Perhaps the entire set would be simply overwhelming, oversaturating for senses and therefore diminishing the perception of the grandeur. Perhaps, I do not know!

The exhibition runs until January 6th.