Golden Byzanthium and the Orient 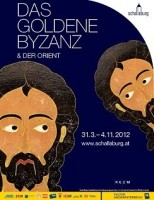 Presenting Byzantium at any level or conceptual basis is always a challenge. The dense layers of historic misconception of social, political and cultural bias are difficult to overcome. The enmity of the Western school of thought which Gibbon so masterfully expounded in his “Decline and Fall of the Roman Empire”, the complexity of the religious and economic divide between the East and the West as contenders for the unique theological and political status and the succession of the ancient Roman and coming triumphant oecumenical Christian Empire, deepened already extant rift. That rift has not become any shallower ever since!

Authors of the exhibition were quite aware of the challenge. The opening words of Falko Daim (Europa neu denken) in the Exhibition Catalogue are testimony to that. The aim to draw attention to the splendor of Byzantium and to the inextricable liaisons with multitude of cultures and nations the Empire devoured or bordered with is a good starting point for an exhibition of the general interest. This is where I start wandering! Because, sometimes what is omitted speaks more than what is present. My point is: why are there no Southern Slavs, what happened to Armenians and Georgians, where the North African Berbers and Copts vanished…

Of course, I am not for a moment forgetting the scope and the limits of Schallaburg display, neither am I going to criticize authors for any intended bias. What I am trying to say is that the present exhibition offers many direct quotes or apparent inklings of the presence, both territorial and cultural, of such above mentioned neighbours, willing or unwilling parts of the millenary Byzantine state and culture, and to omit them without clear and undisputable reason appears to me as a conceptual error. This omission is evident in the exhibition itself, but the full size of it comes with reading the Exhibition Catalogue. The fact is that authors were, apparently, aware of this and tried their best to make it less obtrusive, but it is not possible, because where exhibition rooms offer so much in field of visual temptation to make one occasionally prone to look rather than to ponder, with the Catalogue it is just the opposite!

To avoid Southern Slavs in context of the Byzantine history is, simply speaking, not possible, even if one intends to. Therefore, what might the explanation be? The 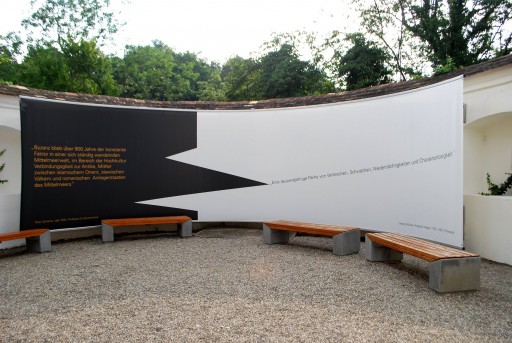 process of the full transformation of Bulgars into Slavic cultural milieu was accomplished much later, therefore medieval Bulgarians should not stand in Slavic stead. Huge part of the so called Byzantine Commonwealth constituted and still constitutes national and cultural territory of Slavonic states and lands. Armenian state(s), the issue of monophysitism and Armenian part in it, the role of the Armenian commerce, crafts and culture in the daily life of the Empire can not be downplayed if one would take history of Byzantium seriously.

I wander if one should take very seriously the written message at the entrance to the Schallaburg Byzantium-exhibition: “Eine tausendjaehrige Reihe von Verbrechen, Schwaechen, Niedertraechtig-keiten und Characterlosigkeit”. Author of this formidable statement about the Byzantine history, religion, society and ethics is Georg Wilhelm Friedrich Hegel, The Philosopher. This is written upon the wide white background, as contrasting with smaller black surface inscribed with modest definition of the geographic and cultural position of the Byzantium, signed by Peter Schreiner, Professor of the Byzantology. The first is statement of values; the second is to be understood as a footnote!

Apparently, the underlying understanding is that Byzantium was explained and defined through the eyes of its enemies, notwithstanding if they proceed from the East or from the West. The perception of Byzantium on the side of the Southern Slavs, Armenians, Georgians, Berbers, Copts, etc. probably could not withstand the requirements of the constant and unlimited hatred against the Great Empire of the Eastern Christendom against which the Hegel’s dictum stands as firm as Chinese Wall.

The exhibition is on display until 4th of November.

« VIENNALE ’12 details revealed » Emperor Maximilian I and the Age of Dürer, through the eyes of a heraldist