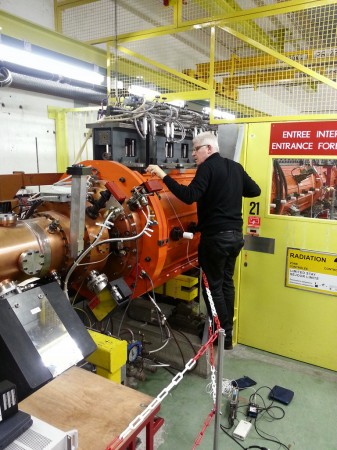 “Applying for this residency was just irresistible,” said the sound sculptor Bill Fontana , winner of last year’s award. “It promised to immerse me into the unknown world of particle physics. As an artist, these experiences into the unknown and unexpected are vital for us – even at 65. You never grown out of this need if you wish to develop as an artist.”

Bill Fontana starts the first part of his residency at CERN this July, and will preview some of the sound pieces he makes there at this year’s Ars Electronica Festival, Total Recall – The Evolution of Memory, from 5 September to 9 September.

“After two very successful years of creative collisions between the arts and science with our Collide@CERN programme, we are looking forward to discovering even more extra dimensions in these powerful interactions thanks to our unique and special cultural partnership with Ars Electronica, Linz,” said CERN Director General Rolf Heuer.

“Sound is one of the most powerful and immediate senses connected to memory which we have,” said Ars Electronica Director Gerfried Stocker. ” So we will be really interested to see what Bill Fontana, one of the world’s most renowned sound sculptors, presents at this year’s Ars Electronica Festival, which is dedicated to the evolution of memory. How will Bill use sound to remember the impact CERN has on him? Come and find out.”

Last year’s Prix Ars Electronica Collide@CERN open call attracted hundreds of entries from 44 countries around the world. This year, like in the others, artists from every field of the arts are encouraged to apply: architecture and new design, visual arts and sculpture, experimental sound work and music, generative art and film, and social media projects that explore how people relate to science and technology are all welcome. The only proviso is that applicants must use digital techniques in the production and/or the development of their proposed project. The closing date is 26 September 2013 and applicants should submit their entries online, including a short personal-testimony video outlining why they want the award.

“Bill on his 4 day introduction visit to CERN this January created a 24 track recording piece because he was so inspired by his experience here.” said Ariane Koek, CERN’s cultural specialist. ” For a world renowned artist to react like Bill did shows the value of what we are doing. We all can’t wait to discover the next artist whose imagination is going to be blasted by interacting with the new ideas of particle physics and to see what s/he does as a result of the experience.” Online submissions close September 26, 2013: http://collide.aec.at/

Launched in 1987, the Prix Ars Electronica is the acknowledged trend barometer in the international media art scene. Each year, juries composed of well-known experts single out outstanding work for recognition and honor their creators with Golden Nicas, the “Oscars of media art.” The competition’s seven categories celebrate the vibrant diversity of contemporary media art: COMPUTER ANIMATION / FILM / VFX, DIGITAL MUSICS & SOUND ART, INTERACTIVE ART, HYBRID ART, DIGITAL COMMUNITIES, [THE NEXT IDEA] voestalpine ART AND TECHNOLOGY GRANT and the u19 – CREATE YOUR WORLD category for Austrian young people. The Prix Ars Electronica Collide@CERN is the digital arts strand of the 3-year Collide@CERN artists residency programme initiated by CERN in 2011, under CERN’s new cultural policy, Great Arts for Great Science. The residency is at CERN for two months and Ars Electronica for one month. The work emerging from the residency will be showcased at the Ars Electronica Festival 2014.