For the duration of the retrospective in Marseille, Hundertwasser Museum in Vienna has replaced the absent works made by loans from private collections and other Austrian museums. Among them is “Rain over China in flames” (1958) – a typical example of Hundertwasser’s “trans automatism” and one of his most important works which was given to the museum by a private collector on permanent loan with immediate effect. Two other outstanding Hundertwasser paintings from mid-1960’s, “The Walker” (also coming from a private collection) and “Homesickness” from the Essl Museum in Klosterneuburg, have never been exhibited in KUNSTHAUS WIEN before. 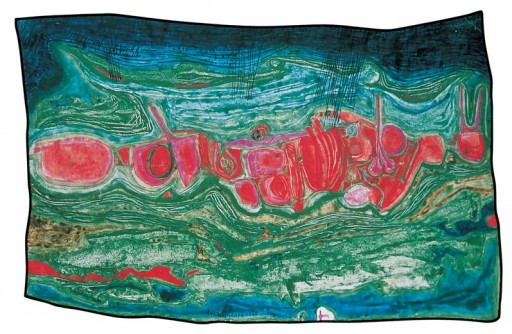 Hunderwasser was, as of early 1950s, mainly because of his love for nature more and more involved in architecture. His experiments with materials and forms established him as one of the most authentic building designers. He showed distaste for sterile, clear cut forms and became notorious for the use of spheres, pillars, turrets, bright tiles and the use of organic forms. From this interest in architecture occurred a number of works with architectural motives predominant in paintings

“Pavilions and Bungalows for Natives and Foreigners” (1980; Painting Gallery of the Academy of Fine Arts Vienna), “Positive soul trees – negative houses of men” (1987; Eisenberger Collection, Vienna) and “Marching grass” (1987; Kastner Collection). In his essay on “Positive soul trees – negative houses of men” Hundertwasser wrote: “what man makes is evil, what nature makes isgood. All this becomes a fable in this painting, a fairy-tale composition the way it always is with me. The trees have a silvery shine; something like a vase of flowers can be seen; and when the painting is stood on its head, the vase turns into a kind of rain. I show the coexistence of human houses and “human trees”. (published in the brochure Kunstwerk, Die Hundertwasser Ausgabe der Brockhaus Enzyklopädie, n.p. 1989, p.21)

Other loans in KUNSTHAUS WIEN are “Taranto invites and Expels Irina – The Cinema” (1969; Peter Infeld Private Foundation, Vienna) and “Red Lady with the mirrors of Mr. Neuffer” (1974; Eisenberger Collection, Vienna).

All paintings, save “Rain over China…” will be returned to their owners after the finishing of Hundertwasser retrospective on the 9th September.