The Chronicler of Unpleasant Truth 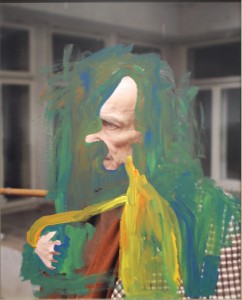 Three months ago, touring Viennese galleries followed by an accompanying pride of art lovers, famous curator Tomas Miessgang vocally articulated a thought that ever since has been coming back to our minds: The ladies put their garments on, the gentlemen are taking theirs off! This comment referred to a new trend visible in the artistic reality of Austria which does put, for the first time, female nude in the plan second to that of the male! Since two successful exhibitions broke the field, the one named “The naked males” in Vienna’s Leopold and the homonymous competitor in Linz’s Lentos, we are witnesses to ever more growing number of exhibitions dedicated to the male nudes. This sudden obsession with the masculine nudity, the internationally established artist Erwin Wurm takes a special place, treating (for many unpleasant and taboo) theme – the nudity of ageing males! At the Albertina exhibition of his new works, titled “De profundis”, Wurm “defrocked” his 25 colleagues, among them some of the most famous names of the domestic artistic scene as Hermann Nitsch, recently departed Franz West, Christian Ludwig Attersee, Franz Graf. Herbert Brandl and Manfred Walkolbinger (to mention just a few).

For his first solo Albertina show Wurm took photos of his models – “by the standards of the profession the most patient and the most professional that exist” – in their natural habitat: in private apartments, courtyards and workshops, creating a vast serial of ninety “Pictures of Friendship” (Freundschaftsbilder), which then he subjected to paint additions. The initial idea to invite international artists to pose in nude as plain reminiscence to important pictorial and sculptural artworks of the gothic, romantic and renaissance periods, Erwin Wurm put aside in favour of the working with people he knew well, claiming the virtues of working with friends and acquaintances.

For the outsiders, “De profundis” is a gallery of anonymous (aged) male nudes, because 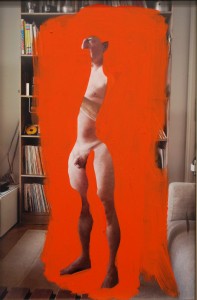 without good knowledge of the Austrian artistic scene it is impossible to guess who is hiding under names as Manfred, Hans or Fritz. Only, it is difficult not to recognize the white beard and protruding belly of Hermann Nitsch, who is (accompanied by Franz West), mercifully spared the indignity of “Couture á la mode d’Adam”.

“Readiness to be ugly” and “being brave to appear in merciless light” are some of the loud comments that concern Wurm’s work, but also address the subjects of his portraits. Sagging muscles, parchment skin, bulging bellies and unwarranted hairs dominate the photographs assisted by the artist with acrylic paints. In the “transforming” process Wurm accents various parts of the human anatomy, sometimes concentrating upon a single detail of the face, the waist or torso, while at some other works the most intimate organ takes central place of the composition. The artist spares not even his own body which, in two cases, he remodels himself adding with brush typically female curves, while in the twelve-part serial of self-portraits done in blue paint on paper one can distinguish clear parallels with Dürer’s self-portrait of 1500-ies or with Michelangelo’s sketch for La Pieta (1530-1536).

Theatricality is one of the cardinal components of the series “De profundis” that refers to the gothic interpretations of the human body; according to Wurm, the idea that only an artist that suffers is deserving honour and glory is unacceptable. Senses and “naked truth” substitute asceticism and meekness. Although the postures of the original models from Gothic and Renaissance period have been maintained, Wurm’s models are – in all their naked vulnerability – left at the mercy of the critical eye of the beholder.

no images were found

The feeling of discomfort is the mildest sensation that a typical consumer soul would experience visiting the exhibition of works of Erwin Wurm; the times we call ours imposes ideals of beauty by which only the lean, sporting or cosmetically perfect body qualifies as the public exposure subject. With Wurm, owing to the way he treats the two-dimensionality trying to add a speck of the material tactility, interventions readily indicate that his basic vocation is a sculpture.

The title of the exhibition “De profundis” comes from the homonymous letter of Oscar Wilde, written and sent by the writer serving at the Reading Prison his two year incarceration term to his lover Lord Alfred Douglas. “De profundis” is basically the introductory verse of the Psalm 130 (Out of the depths I cry to you, Lord!, In Latin, De profundis clamo ad te domine), which – save for Wilde – inspired composers as Franz Liszt, Christoph Wilibald Gluck, Johann Sebastian Bach and Felix Mendelssohn, and inspired Georg Trakl to create one of the most depressive poems he ever wrote.