Towards the first “Das Dorf in Wien” festival of music documentaries, September 26th-29th 2013 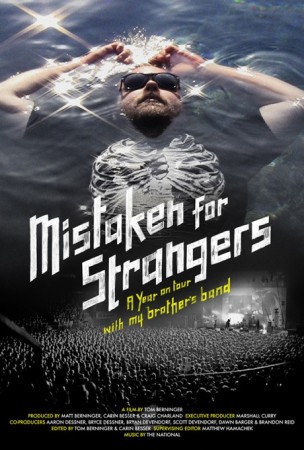 During four nights, the Schikaneder cinema will host the Das Dorf in Wien rock documentary film festival with a total of thirteen productions, eight of which are Austrian premières.
One of festival’s strongest cards is Thomas Berninger’s directorial début “Mistaken for Strangers” about the American indie-rock band The National. The audience is given the opportunity to see a selection of recent international rockumentaries, among them Dušan Moravec’s “The right man for capitalism” (USA, 2013) about one of the most important representatives of the music scene in the former Yugoslavia: Bosnian musician, poet and performance artist Damir Avdić, Henly Banks’ “Apocalypse: A Bill Callahan tour movie” (USA, 2012), “Gainsbourg by Gainsbourg” by Pierre-Henry Salfati and “Kike Turmix” by the Norwegian director Roger Sommerseth about the Spanish punk legend who died in 2006. “Jazz apartment” offers an intimate look at the formation of the jazz festival “Kamene priče” in Bale (Cro) by Biljana Čakić-Veselić and Tomislav Lovro Pavlek and “The SexA case” (Cro, 2012) by Ines Pletikosa concentrates on the story about the Croatian noise band SexA whose members left the country at the outbreak of war in former Yugoslavia in 1991.
Das Dorf in Vienna is the Austrian, guest issue of Dorf which was founded seven years ago by Tony Šarić in the Croatian town of Vinkovci. In addition to a selection of regional and international films, the original festival offers screenings out of competition and a number of events in frames of the “off Dorf” program consisting of exhibitions, book launches, workshops, concerts and DJ performances. The Viennese audience will have the chance to become acquainted with the art-works of the Croatian comic book author, artist and poster designer Igor Hofbauer. The Zagreb-based punk rock band Cherkezi United will give a concert at the Ost club. At the opening evening at the Schikaneder, DJs Dieter Pfeiler aka Le Flic (Beatzentrale, A Scooterist Night Out) & Stefan aka Skorepa Skoul (Sound of Soul, Scooterist A Night Out, Tighten Up) will spin their records playing a mix of northern & modern soul, funk, Latin music and the sound of the 60’s.

We spoke to Toni Šarić about the festival, the ideas behind it and what the future brings to “Das Dorf in Wien”.

Over the past seven years, we have visited 57 cities in 5 countries of the former Yugoslavia, in some of them we have been several times. The concept was proven very good and each year new cities and new associates have shown their interest in our programme. The idea is to introduce recent documentary production in the truest possible way and some new “fresh” faces from the art scene outside of the movie business to the accompanying programme. In cooperation with Austrian partners, the Viennese presentation is organised at three locations. We would like to invite all interested parties to come to Schikaneder between 26-29/09 and have a look at our programme.

What was important in selection of films for the local audience?

The idea was to cover part of the production for people of Croatian origin or from neighbouring countries, giving them the opportunity to see films from their regions for the first time. On the other hand we also wished to introduce some of the most interesting films from the current international productions. That’s why we’ve got two selections with a total of 13 films and I’m sure that many Viennese fans of documentary genre will find something to their taste. In the next few years we plan to further develop programmes and concepts. This is a pilot release and I hope that many will remember this year as “year, 2013 when the National was screened at the festival” …

How did it come to the cooperation with the city of Vienna and the incredible chance of establishing the festival abroad on annual basis?

We have had contacts with the team from the club AU and besides, my brother lived in Vienna for a year where he met lot of people, including Renato Tonković who offered us partnership with his production team. I wish to take the opportunity not only to thank him, but also Goran & Co. My “thank yous” also go to the agile Austrian Cultural Forum in Zagreb. Stefan Skořepa and Dieter Pfeiler from Vienna made us dance twice at the Dorf in Vinkovci with their ingenious set of vintage music, and through them I met and strengthened ties with the Vienna film- and music lovers.

You conveyed the spirit of Dorf with the accompanying programme which is essential for your festival from the beginning – there’s an exhibition, a live concert and a DJ Night.

Movies are just an appetizer … Every year we have exhibitions of comic books, posters, filigree jewellery and photography. We strive to give the opportunity and media space to some interesting authors. Igor Hofbauer is without doubt one of them as one of the most important underground Zagreb artists in the past 10 years, with his distinctive style and good taste. Logically we chose his concert posters as the best evidence of his talent and sensibility to the unusual. Igor used to be a musician and you should definitely pay attention to his comics and illustrations. I would be glad to introduce his art in its all glory. My personal favourite is his poster created for the concert of Jonathan Richman … Cherkezi United is an interesting combination of live music from Russian cartoons and ska / punk energy, which, for some years has been winning the sympathy of the audience. They recently began singing in Croatian, making them the next big thing on the local music scene. Simple and fun, their concerts are odes to joy and I am really glad that they’ll perform in Vienna thanks to Dorf. The opening at the Schikaneder on the evening of September 26th is orchestrated by Stefan and Dieter. Their choice of music played from singles is exactly what we need. Personally, I cannot wait.

Do you intend to expand your programme in the years to come?

It all depends on how the situation progresses. There is enough material to do a festival every month and that is a sweet torment. We certainly do not want to go beyond established coordinates and our desire is to keep the festival this size, help young authors and to have sufficient reasons to maintain this form. We launched cooperation with other authors and concepts and it remains to see which way things will develop.

Which films can you personally recommend to the Viennese audience?

“Mistaken for stranger” directed by the brother of Matt Berninger, the singer of The National, is certainly the culmination of this year’s edition. We’ve got the film exclusively and this is the moment to thank Mato Škugor for his help. It’s very entertaining and even if you do not like The National, you will probably love the narrative approach. Another special treat is about the legendary Bill Callahan. Just like the music, the film functions as a VJ material and it’s great. Regarding films from the ex-Yugoslav countries, I would like to mention 2 of them: the winner of this year’s Dorf in Vinkovci – “SexA” about the members of the Croatian cult noise band and their careers after immigrating to Netherlands and “The right man for capitalism” about Damir Avdić, a brilliant Bosnian author – this long awaited story will not leave anyone unmoved.